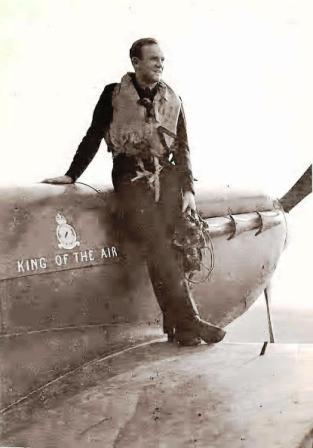 Ian Ross Ingram was my uncle.

In the 1950s, I attended Canberra High School, where Ian’s name was one of a dozen or so on the Honour Board outside the Headmaster’s office. Ian was killed in 1942, just after I was born. It seemed very special (and rather puzzling) to see this link to an ex-student of the school I had heard much about from my Grandmother and had never met, but it sparked a keen interest in his life.

Ian was born on 12 September 1920 in the family home at 28 Princes Street, Monifieth near Dundee in Scotland. He was the youngest of Adam and Jessie (Janey) Ingram’s three sons. Each of his older brothers, Adam Harvey (Tim) and Kenneth Ross (Ken) is the subject of an entry in the ACT Memorial. Like many Scots the family placed a high value on education and Dundee was well served with fine educational institutions. In 1925, at five, Ian joined his older brothers at Grove Academy in nearby Broughty Ferry, a short train ride from Monifieth.

In early 1926 the family migrated to Australia and moved into a rented house in Drummoyne, arranged by Adam Ingram’s brother who was already working in Sydney. By late March Ian and his two brothers had enrolled at Drummoyne Public School. The boys quickly learnt to adjust to different classroom and schoolyard cultures, although an initial difficulty arose when they arrived at school in their Grove uniforms, speaking with an accent derided by their schoolmates as “pommy”.

Adam Ingram found work was plentiful in the new national capital and he moved there on his own in May 1926. By the end of 1926 he had worked as a tiler on some of the buildings then being constructed in early Canberra, including old Parliament House, and had built the family home in Rous Crescent, Forrest. The family moved into the house in December 1926, joining other families who moved to the new national capital in its very early days.

Ian was a keen sportsman and enjoyed competitive swimming at the Manuka Pool (tiled by his father). He played Rugby for his school and is photographed in an early issue of the school magazine, The Yarralumlan, with the school’s Rugby firsts. In 1938 he was also playing hockey for the Telopea Park ex-students hockey team.

As well as school, life for the three Ingram boys in early Canberra involved exploring the bush around them and they came to know the whole area very well. There was swimming in the Murrumbidgee, picnics in the surrounding areas including the Cotter, Tharwa, Pine Island and Kambah. Then there was skiing in the surrounding mountains, Mount Franklin, Brindabella, Kosciusko and Smiggins Holes.

Life also included happy family holidays camping at the south coast of NSW, particularly at Tuross Head and also at Bateman’s Bay and Batehaven. In most photographs capturing these holidays, Mr and Mrs Ingram are dressed formally – a suit for Mr Ingram and a formal dress and hat for Mrs Ingram while the three boys are in shorts or bathers, sometimes carrying fishing lines or rabbits shot for the stew.

In 1939 Ian joined the Commonwealth Public Service and worked at the Public Service Board. He also joined the 3rd Battalion (militia). On 6 January 1941 Ian enlisted in the Royal Australian Air Force. His logbook, an oil-stained, aged book where he carefully outlined all his flying hours, aircraft types and training locations, provides a clear insight into his flying life.

Ian’s initial training comprised six weeks basic flying at Bradfield Park, Narranderra, NSW. He graduated from Narranderra with a total of 50 hours and 45 minutes flying experience, for the most part flying Tiger Moths.

Ian then became part of the Empire Air Training Scheme and was posted for further training to Canada. His parents and other family members travelled to Sydney to farewell him – no doubt a sad parting for all, although for those embarking there were some farewell parties with friends and colleagues, perhaps to relieve the gloom. Ian’s mother later told her daughter-in-law Peg Ingram, that on the day he sailed, she did not dream that she would never see him again.

In Canada, Ian trained with No.1 squadron at Uplands, Ontario, flying Harvard aircraft and working in a Link Trainer. He also took the opportunity to visit branches his mother’s family, the Annans, who had migrated to Canada. This included his mother’s brother Jim Annan, his family and other Annan family members, part of the Scottish diaspora who settled in Canada in the early part of the 20th century. Ian’s diary contains the names and addresses of half a dozen Annan family members living in Toronto and several then living in California, New York and Detroit. Photos sent home record happy visits to the Annan family and friends in Canada – providing some contact between the widely scattered family members and no doubt welcome news and also some comfort to his family at home.

At the end of his training in Canada, Ian’s Commanding Officer described him as “a hard working officer with no lack of offensive spirit. He is reliable and with more experience will be an asset in any flying unit”. He graduated from No.2 Service Flying training School Uplands on 1st September 1941, sailed for Britain on 9th September and arrived there on 24th September 1941.

Ian’s logbook shows that in the United Kingdom he moved on to training with 225 Squadron on Lysander aircraft. The Lysanders were used for pilot training and the Squadron also had responsibility for flying coastal patrols along the coast of Hampshire and the Isle of Wight and for air sea rescue duties. He flew Hurricanes when 225 Squadron received them in January 1942 and he was appointed a Flying Officer on 1st March 1942. From then on he flew Hurricanes, Spitfires and Mustangs with shorter times flying various other aircraft with several other Squadrons. His nickname was reported to be “the weaver”.

While in the UK Ian took the opportunity to visit many uncles, aunts, other family and old family friends in Monifieth, Broughty Ferry, Dundee, Glasgow and Edinburgh. His diary also contains names and contact details of other friends - young men and women in various parts of England and Scotland. He wrote to my parents (dated 2 May 1940) congratulating them on my birth and noting that there should be “no young man keeping her out at the Bidgee nearly all night because he lost the keys of the car!”

In that letter Ian also details a week’s leave in London taken a month earlier. He saw some “shows” including a play with Vivian Leigh (“a very polished actress”) and a performance at the Windmill Theatre (“nothing more than bloody awful”).

In his letters home his homesickness is palpable. During a week of training with the Army on the Isle of Wight as part of a scheme to encourage co-operation between forces, he found “the weather was glorious and it reminded me of a real Australian spring and I felt quite at home”.

Ian’s logbook shows that he finished flying in the UK in mid September 1942. He was then posted to 81 Squadron, a fighter squadron and sailed with them (and their crated aircraft) to Gibraltar. Their task was to support the Allied invasion of North Africa, Operation Torch. On 8 November the Squadron flew from Gibraltar to Maison Blanche in Algieria (470 miles) as part of a large contingent of planes and ships supporting the allied force advancing on German-held Tunisia. The only four combat flights in North Africa shown in Ian’s logbook are:

On 13 November he was transferred back to 225 Squadron flying Hurricanes. His Wing Commander wrote of him: “We were all very glad to have him back as he was a very capable pilot and a most efficient officer and very popular indeed in the Squadron.”

In the broader context, the German High Command was concerned about its vulnerability in Tunisia. Bone, in Algeria, had been occupied by the Allies on 12 November and became important for its sea port and its airfield. From 14 November 1942 onwards the German High Command posted squadrons of combat experienced, battle hardened German pilots from the Russian front, together with Panzer Divisions, to counter the major westward push by British and American forces towards Tunisia. Both US P38s and RAF Spitfires suffered very heavy losses after that time.

Ian was one of a pair of Hurricanes reconnoitering over the Mateur/ Bizerte area on the morning of 27 November. He was attacked by a German fighter over the Djebel–Mateur region near the Gulf of Tunis and badly injured. He was able to land inside Allied lines and was rescued by Allied troops. However he died from his injuries two days later, on 29 November 1942, aged 22. His logbook records only the four missions detailed above at the time of his death.

It seems likely that he was in fact shot down by German Pilot Officer Walter Recker (Unit 4/JG53) flying a Messerschmitt 109. Recker officially claimed shooting down one of a pair of Hurricanes in the same area, on 27 November at 10.15 in the morning, at a height of 20 metres.

The Ingram family was devastated as were so many families at that time. Although they were a typically undemonstrative Scottish family, Ian’s mother (my Grandmother) sometimes talked about Ian to me when I was a child. She told me that as soon as she saw the local Minister walking across her front lawn that day, she knew that he had come to tell her Ian had been killed. Ian’s oldest brother Tim believed his mother never recovered from his death. She died in 1959. Ian’s father died some eighteen months after Ian was killed. My mother also said that Ian’s death was only one of two occasions that she saw my father Ken cry in almost sixty years of marriage.

Ian is buried in the Bone War Cemetery near Annaba in Algeria, managed by the British War Graves Commission. Although a friend of the Ingram family visited his grave some time soon after the war and sent a photograph to his mother, it is now very difficult for other family members to visit. British and Australian authorities both very strongly advise that it is highly dangerous to visit that part of Algeria.

Perhaps it will be possible to visit his grave in the future. In the meantime stories such as this and the many others increasingly held in this and similar memorials, add a varied interpretation of war history to those that are a more traditional elaboration of the events of “great” men and battles.