“In cottage after cottage the troops found on the walls photographs of Australians who, in the Somme days, had been taken into the family circle and who were still remembered eagerly.” - Charles Bean 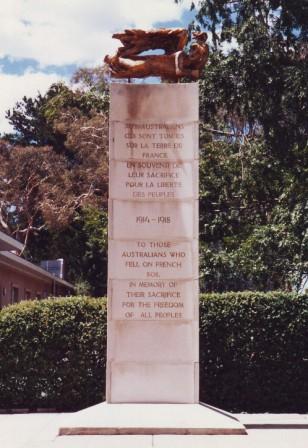 During World War 1 a close link was forged between Australia and France that has survived to this day. A symbol of that link is a memorial which stands in front of the French embassy in Perth Avenue, Yarralumla. It was erected by the French government as a token of graditude to the Australian soldiers who fought and died on the battlefields of France in 1914-1918.

The memorial was unveiled on 28 July 1961 by Prime Minister Robert Menzies at a ceremony attended by a number of high-ranking dignitaries, including General de Gaulle's special envoy, General Zinoni Pechkoff (the son of Maxim Gorki), the Commanding Officer of French Pacific Forces General Appert, as well as other French and Australian military representatives.

The 15 foot high memorial is comprised of two sections - a square pillar, designed by French architect Desmaret, and the sculpture which surmounts it. The front of the pillar is inscribed with the words;

followed by the English translation;

To those Australians who fell on French soil, in memory of their sacrifice for the freedom of all peoples 1914-1918.

On the sides of the memorial are the names of the most prominent battles in which Australian troops were involved during the Great War - Armentieres, Villers-Bretonneux, Fromelles, Hazelbrouck, Dernacourt, Pozieres, Mont St Quinten, Bullecourt, Somme, Amiens, Hargicourt, and Bellicourt. The gilded bronze sculpture on top of the memorial, 'Winged Victory', is the work of French sculptor Bizette-Lindet. The memorial was re-gilded in 1998 as part of the commemorations marking the 80th anniversary of the end of World War 1.

Whether by accident or design a somewhat poignant moment occurred at the unveiling ceremony. Between the playing of Reveille and the French national anthem, a cockerel, the symbol of France, could be heard crowing in the distance. As General Pechkoff said at the ceremony, the memory of Australians who fought in France "was engraved on the hearts of the French people".