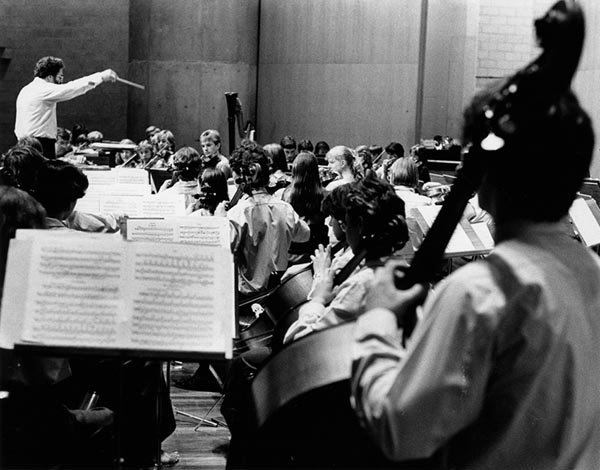 Richard McIntyre rehearses the Canberra Youth Orchestra at the Llewellyn Hall, May 1985.

Richard McIntyre graduated from Sydney Conservatorium with a Bachelor of Music (Composition), having also studied bassoon privately with John Cran. He was bassoonist in the Australian Youth Orchestra at the Adelaide Festival in 1966 and in the ABC Youth Concerts in Melbourne in 1967. He first appeared with the Canberra Symphony Orchestra (CSO) in 1965, becoming a regular guest from 1967 until he joined the orchestra in 1978 as Principal Bassoonist.

In 1975 he and his wife Gillian, then living in the Sydney suburb of Lane Cove, formed the Lane Cove Symphony Orchestra (now Mosman Orchestra); Richard was musical director and chief conductor, and Gillian was concertmaster. The managing committee was drawn from local residents, Lane Cove Council supported the venture, local businesses assisted with finance, and the first concert was given at the Town Hall in December. Many of the musicians went on to professional careers in music.

Richard married Gillian Rae de Beyer Bailey in the early 1970s, and they had four children, two born in Sydney and two in Canberra. Gillian was a violinist in the Sydney Symphony Orchestra; she now teaches in Canberra, as Gillian Bailey-Graham.

In 1976 Richard and clarinettist Donald Westlake, also a member of the Sydney Symphony Orchestra, discovered a shared ambition to start a top quality wind ensemble. The dream became reality in 1978 as the Canberra Wind Soloists. A world-renowned wind quintet of faculty members of the ANU School of Music, it is Australia’s longest-lived professional chamber ensemble and has recorded and toured internationally. Richard has arranged large-scale orchestral works to suit the Soloists, giving them a unique repertoire.

Richard is a highly respected and successful bassoon teacher at all levels. His own repertoire includes works from the 16th century to modern avant-garde, and in his teaching he places great emphasis on understanding the bassoon’s place in all musical styles. An unusually high proportion of his students have established successful full-time careers as professional musicians both within Australia and overseas, as performers and teachers as well as specialists in historically-informed performance on period instruments. In addition, he has significantly increased the bassoon teaching repertoire with his transcriptions and arrangements.

As a bassoonist, Richard has been Guest Principal and concerto soloist with the SSO and other Symphony Australia orchestras, the Australian Chamber Orchestra, and has performed with the Australia Ensemble and many other prominent chamber groups.

Appointed guest conductor of the Canberra Youth Orchestra (CYO) for their successful 1980 European tour, in 1981 Richard took over as conductor and director. He diversified their repertoire, focusing initially on late 19th and 20th century composers, particularly Russian, and the lighter classics before taking a bold step into the world of Beethoven and Mozart. The orchestra responded well, and in 1990 won the prestigious youth orchestra prize at the Vienna Festival of Youth and Music as well as the festival prize for the best radio performance. Richard retired as conductor at the end of the 1990 tour.

The ability to develop good personal relationships with his students and his orchestras is a key factor in Richard’s success. He admitted to being “one of the world’s oldest adolescents”, and believes that the first consideration in dealing with young people is to make the activity enjoyable. Rapport established, he then treats them as adults. One of his students said of him in 1999: “Ric encourages people to be multi-faceted. He believes in cultivating the whole person; in having many talents and interests”.

Increasingly, Richard has been invited to conduct orchestras around Australia. In 2000 he conducted a workshop for interested Townsville residents, to test the viability of establishing an orchestra in the city; he then conducted the inaugural concert of the Barrier Reef Orchestra and returned annually in his role as joint senior advisor and to conduct that year’s concert.

In 2013, having retired from the teaching staff of the ANU School of Music, he was joint guest conductor of the National Capital Orchestra (NCO), a full symphony orchestra that draws its membership from both the general community and current and former members of the CSO and the CYO. He retained his connection with the School of Music as a Performance Fellow.
Richard has not confined his conducting to orchestras, he has directed the Oriana Chorale, one of Canberra's leading a cappella choirs, and the School of Music’s Llewellyn Choir (1992-2005).
A keen amateur photographer, bushwalker and model railway enthusiast, Richard generally does not listen to music. He lives with his second wife, Megan Taylor, a cello teacher since 1972 who also worked at the School of Music for many years.