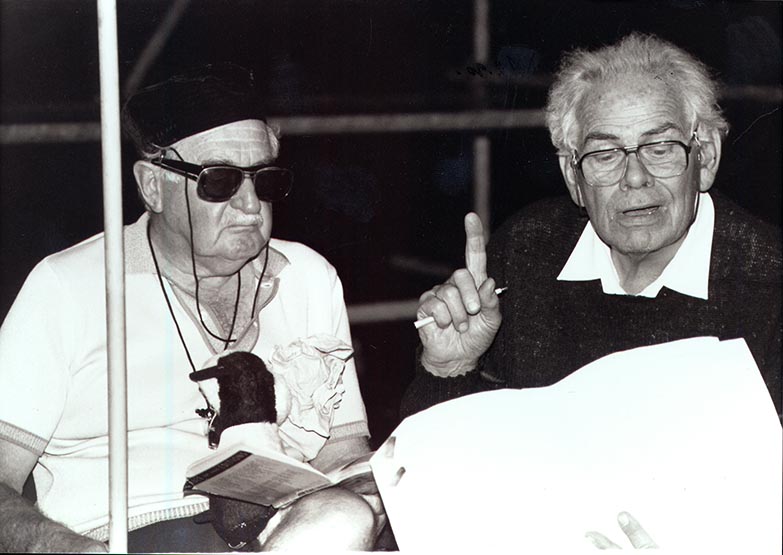 Ralph was born in Newcastle in 1917, the son of Robert Morton Wilson (ca 1885-1968), the highly regarded quartermaster (accountant) for Caledonian Collieries, and Ellen nee Bergholz. Ellen’s death when Ralph was nine affected him deeply for the rest of his life. His father raised Ralph and his sister with a Scots reverence for education, instilling the habit of rising early to study that Ralph continued almost to the end of his life.

He attended primary school in what was known as “The School on the Hill”, a school established about 1813, then went on to Newcastle Boys’ High School where he was dux of his Intermediate class as well as topping the class in English, Mathematics 1, Latin and German. Two years later, in 1933, he passed the NSW Leaving Certificate examination with first class honours in Latin, French and German, and second class honours in English. It was noted that such distinction in four languages was “remarkable, and may not be surpassed in the full results of the State”. He shared the Modern Language Association of NSW prize for the highest marks in German in the Intermediate and Leaving Certificate examinations.

Ralph won an exhibition (scholarship) to Sydney University, completing a Bachelor of Arts in 1937 followed by a Diploma of Education. In 1939 he was appointed to the new Newcastle Technical High School, teaching general subjects including the one foreign language offered – German. This was the first technical high school in NSW outside Sydney, and catered for the higher and professional grades of the technical colleges.

By the end of 1939 Ralph was reaping high praise for his music appreciation program, introduced as an extension of class singing with the aim of broadening children’s experience of music. By using the latest technology, a radiogram, he was able to play records of classical music and then discuss the composer’s treatment of the music.

War broke out and in June 1940 the Younger Set of the Newcastle Red Cross produced Noel Coward’s The Young Idea to raise money for a military ambulance. Ralph undertook the stage management and musical direction. Later that year he designed strikingly simple but radically modern sets for the Civic Choral Society’s performance of Verdi’s Ernani. It was the start of a lifelong passion for the theatre, as actor, set and lighting designer, director, producer and teacher.

The theatre world of the 1940s was very left-wing and Ralph, although personally uninvolved in politics, naturally mixed with unionists and communists. When his German language skills came to the notice of military intelligence, Special Branch were convinced that he could only have acquired them in Germany, but after investigation they concluded that he was a “person of upright character”, highly regarded, and should be recruited for the war effort. Ralph never mentioned his war work.

After the war Ralph began giving lectures on producing plays, using students from the Technical High School to demonstrate his methods. Although aimed at teachers, the lectures were also open to the public. His extensive knowledge of non-English literature, particularly German, French and Russian, and of the various movements in both Australian and European art, allowed him to break away from traditional interpretations and staging conventions. Typically, his innovative sets and lighting won praise from actors and critics alike and became the most recognisable feature of his work.

Ralph was languages master at Sydney Boys High from about 1947 until he moved to Canberra in 1952. In 1948 he met Antonia (Toni) June Veen at a literary salon in the home of Harry Stoljar, in Kings Cross, and they married the following year. It was a cosmopolitan, rather bohemian life and Ralph steeped himself in the socially engaged theatre promoted by Jock Levy at the New Theatre.

Canberra in 1952 was still part of the NSW education system. Ralph initially taught languages at Telopea Park high school and later at Canberra High, was Assistant Principal at Dickson High in 1964, then Principal of Canberra High in 1970. His retirement in 1981 was marked by a student production entitled The Rocky Horrie Show, ‘Horrie’ being his nickname at the school. During his tenure the ACT education system separated from NSW in 1974 and introduced secondary colleges in 1976, moves that delighted Ralph who believed that Canberra had "probably the best educational institutions in Australia". Despite his obvious delight in the theatre, Ralph said that his time as principal of Canberra High had given him the greatest satisfaction.

Students tend to focus on his sometimes terrifying memory for names and faces (within a week he knew each new student by name), but this skill was apparent in all his interests whether learning lines or analysing film techniques for later lectures. It was also said that he knew every malt whisky that came out of Scotland.

Ralph joined Canberra Repertory Society as an actor in 1952, producing his first play in June at the Riverside Theatre in Barton. Earlier that month he had been selected for a radio play recorded by the ABC and broadcast on 2CY. In July he memorably played Aaron Sherritt in Rep’s production of Douglas Stewart’s Ned Kelly. He set a cracking pace throughout his 40 years in Canberra theatre, directing more than 200 plays, arranging fortnightly film appreciation nights, and lecturing on stage production techniques, script writing for films, and dramatic structure.

By 1964 Canberra audiences knew that any production by Ralph Wilson would be interesting, unconventional, exciting and thought provoking. This was also a period of fringe theatre and independent, experimental productions and The Australian Theatre Workshop at the Childers Street Theatre drew Ralph’s directorial attention from the mid 1960s to the 1980s. At the other end of the scale were numerous productions for Dickson and Canberra High School students, as well as for the Canberra Philharmonic Society.

Retirement just provided more time for the theatre. With Phillip Mackenzie he founded the Classical Theatre Ensemble. In 1983 he was producing plays for Pie in the Sky Theatre at the Canberra Rex Hotel. In 1987 his extensive background notes on Chekhov were published by Fortune Theatre Company and Gorman House Arts Centre. He founded his own company Rawil Productions which in 1993 presented rehearsed readings of four plays by Patrick White, a long-held ambition.

In 1988 Ralph was not only awarded the Medal of the Order of Australia and named Canberran of the Year, but achieved the rare distinction of having a theatre named after him in his own lifetime. The E Block theatre at Gorman House, renamed the Ralph Wilson Theatre, hosted many of his final productions.

Although he never allowed himself to be limited by any style or period, Ralph was drawn not only to the darker, northern European writers who confronted the great questions of right and wrong, purpose and meaning – playwrights Strindberg, Witkiewicz, Chekhov, Gogol, Brecht and his great favourite, Beckett, as well as Freud and Dostoevsky – but also to Patrick White and artists Sidney Nolan and Arthur Boyd, whom he had met in Sydney. He became known for staging plays that were usually found only on library shelves or listed as study texts, bringing enormous variety and several Australian premieres to the Canberra stage. His interpretations of Beckett, from the first production in 1955 to the last just before his death in 1994, were world-class.

Ralph’s final production was Beckett’s Footfalls, played by one woman visible on stage and one concealed in shadows. The last weeks of rehearsals were directed from Ralph’s hospital bed; the actors were taped in performance, Ralph listened to the tapes and made notes for the actors. He died peacefully at Morling Lodge on 28 May 1994, never having seen the play on stage.