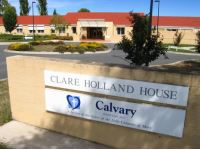 Clare Philomena Holland (1941-1998) trained as a nurse in Sydney and then served in the Australian Army in Vietnam, for which she received a humanitarian overseas service medal, awarded posthumously. She came to Canberra in 1973, worked for several years at Woden Valley Hospital and then in community nursing. In 1988 she was appointed the first manager of home-based palliative care. Clare died of breast cancer on 24 July 1998, having helped pioneer palliative and hospice care in Canberra.

After her death a committee of her nursing colleagues placed a memorial stone and planted a double lilac tree at Royal Canberra Hospital. They also raised funds for an annual nursing scholarship for students at the University of Canberra, in oncology, palliative care or community nursing, and began lobbying for the ACT Hospice to be named Clare Holland House. The hospice was then in the refurbished H Block and Isolation Wing of the old Royal Canberra Hospital.

Hospices, in the sense of being places of care for the incurably ill and dying, date from the Crusades at the end of the 11th century. In Victorian times they cared for the dying poor. The first Australian hospice was established in Adelaide in 1879, followed by another in Sydney in 1890 and several more by 1930. The modern hospice is based on ideas developed and implemented in the 1960s by Dame Cicely Saunders, a British nurse who believed that terminally ill patients needed compassionate care to help allay their fears and concerns as well as medical care to ease their physical symptoms. At the same time a Swiss psychiatrist, Elisabeth Kubler-Ross, was critically examining the existing social responses to terminal illness. Her best selling book, On Death and Dying, profoundly influenced hospice development.

The ACT Hospice Society was formed in the early 1980s to promote the development of palliative care for the terminally ill. Home-based palliative care in Canberra began in 1985 as part of the ACT Health Authority’s Community Nursing Service, with administrative services based in Calvary Hospital. The ACT Hospice Society also recognised the need for a dedicated place to provide care for the terminally ill who could not be cared for at home, and as an alternative to a hospital ward.

Hospital services for the Territory were already under scrutiny, and the political, medical and public debate over the future of Royal Canberra and indeed the whole of Acton Peninsula was an exceedingly hot topic for close to 20 years. The idea of a stand-alone hospice, not part of a hospital, also drew considerable debate.

In 1991 the ACT government decided to close Royal Canberra and develop non-acute health care facilities on Acton Peninsula, including a hospice, a convalescent home, community health services, and the Queen Elizabeth II Home for Mothers and Babies relocated from Civic. Primary care would continue at Woden and in the redeveloped and enlarged Calvary Hospital at Bruce. Although the other proposals lapsed, redevelopment of some of the hospital buildings was seen as an acceptable if probably short-term solution. A chapel was included on the understanding that the buildings’ façade would not be altered. The refurbishment won John Hindmarsh a Master Builders’ Association merit award in 1995.

The ACT Hospice at Acton was officially opened on 14 February 1995. In 1997 the remaining buildings of the hospital were scheduled for demolition, including Sylvia Curley House that had provided accommodation for visiting relatives of patients. A group of palliative care volunteers sat with the patients during the main demolition exercise; all were issued with ear muffs and dust masks. After the explosions finished they replaced the pictures and ornaments that had been dislodged by the shock wave. However, Sylvia Curley House had not been completely demolished, and for the next series of detonations the patients were evacuated to Calvary Hospital, remaining there for six weeks while the site was cleared.

The Hospice was a 17-bed facility, with single and double rooms and an enclosed verandah that allowed patients to receive visits from their pets. Each bed overlooked the lake; some patients would ask to be woken to see the sunrise over the water. As with home-based palliative care, the emphasis was on living rather than dying. "The dying process is such a short time — mostly only a few minutes or hours," says nurse Mary Hodda. "The rest of the time people are living."

Acton Peninsula was an ideal location. The old hospital gardens were largely intact, and the lake on three sides provided both privacy and uninterrupted views. Patients spent time outside whenever possible, feeding birds and watching the rabbits and other wildlife. The first patient was a keen fisherman, so the hospice staff acquired fishing gear for him. In its first year the hospice hosted a wedding so that the mother could attend. So did all the residents.

It was not to last. The National Museum of Australia, also the subject of much debate over many years, was to be built on the Peninsula. A new facility was built in Grevillea Park, Barton, just east of Kings Avenue bridge on the northern shore of Lake Burley Griffin.

On 13 October 2000 the hospice at Acton was named Clare Holland House, and carried the name with it when the new building was officially opened on 5 February 2001. It was upgraded in 2007 to a 19-bed facility of mainly single rooms. The Home Based Palliative Care service formerly at Calvary Hospital was moved to Clare Holland House to enable the medical and support staff to provide care to people in either the hospice or home environment.

The new location also has lake views, and gardens are gradually transforming the previously bare site so patients, staff and visitors can again enjoy the outdoors. The Wallace Memorial Labyrinth has been designed to encourage residents to seek inner calm, balance and perspective in their final days by taking a journey along the winding path. On a one hectare site adjacent to but not part of the hospice is a meditation and healing garden. The main garden runs along the foreshore and includes extensive rock walls, pools and sculpture, provided and maintained by both the ACT government and several community organisations.

The team of 70 staff at Clare Holland House was honoured in 2005 as the Canberra Citizen of the Year. In September 2010 members and supporters of the ACT Palliative Care Society gathered at Clare Holland House to plant another lilac tree and to put Clare’s memorial stone where it belongs, at the hospice that bears her name.

2005 Canberra Citizen of the Year for provision of palliative care to people with terminal illness, inclusive of their family and friends