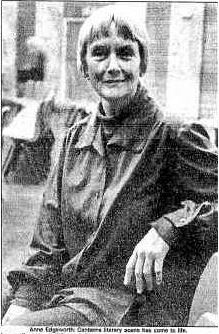 Anne McIntyre was born on 30 November 1921 in Launceston, the youngest of four children of Dr and Mrs William Keverell McIntyre. It was an illustrious family line. Keverell (1881-1969) left school at 18 and served in the Boer War 1900-1901. In 1904-1907 he studied engineering at Sydney University, where he met, and married in 1909, Margaret Edgeworth nee David (1886-1948). Margaret was the daughter of Professor Sir Tannatt William Edgeworth David, geological surveyor and Antarctic explorer.

The McIntyres spent five years on Tasmania’s west coast where Keverell was an assayer at Mt Bischoff and Zeehan. Having seen at first hand the difficulties and dangers of childbirth in remote mining settlements, Keverell decided to become an obstetrician and moved the family to Scotland where he studied at Edinburgh University, graduating in 1915. He enlisted in the Medical Corps in World War 1 and earned the Military Cross at Salonica, then returned to Edinburgh to work in obstetrics and to complete his postgraduate degree. Back in Launceston in 1921 he established himself as a gynaecologist, one of the first to specialise in this field; his contribution both in Tasmania and overseas earned him a CMG in 1960.

Margaret joined the National Council of Women, the New Education Fellowship, the YWCA, Launceston Youth Movement and was a Girl Guide commissioner. She was also a leading light in amateur dramatic circles,  in 1926 founding and then for 22 years directing the Launceston Players. In 1948 she was the first woman elected to Tasmania’s Legislative Council. She died in a plane crash near Quirindi, NSW in September 1948.

Anne attended Broadland House Church of England Girls Grammar School, Launceston, then Frensham School, Mittagong (1935-1938), from where she went to Sydney University to study biochemistry. During vacations she appeared in her mother’s productions for the Launceston Players. In 1942 she married Rowland Anthony ‘Tony’ Godfrey-Smith (1919-2005) and continued to work as a clinical biochemist at Royal North Shore Hospital until she and Tony, a doctor, moved to Tasmania just before their first child was born.

When her mother died Anne stepped in and directed the Launceston Players. She had already written at least one play for the group and helped train the young actors, who called her “Mrs God”. From early 1948 she was also secretary of the newly formed Launceston branch of the Arts Council. In 1950 the Godfrey-Smiths went to Britain, Tony to complete postgraduate medical training and Anne to spend three months as a student at the Stratford-on-Avon Memorial Theatre at the invitation of its director Tyrone Guthrie, who had seen one of her productions in Tasmania. Anne also studied repertory in the West End of London, visited repertory companies in Birmingham and Liverpool, and studied lighting and backstage arrangements at Drury Lane and Covent Garden theatres, amongst others.

Back home, Anne was producer for the Launceston Players, tutored in drama for the Adult Education Board and organised the first three Tasmanian drama festivals before being appointed producer-manager of Canberra Repertory Society, the first woman in the position. Leaving her family in Launceston, she moved to Canberra in January 1954.

Rep was at that time in the Riverside complex at Barton, timber and plywood huts that had been built in 1946 to house the first post-war British migrants – tradesmen brought out to build Canberra. By 1954 the rather spartan huts had become home to several of Canberra’s arts organisations. Anne’s reaction was unexpected: “It’s a pity there are not more like it in Australia. It has an intimacy that far outweighs its disadvantages”.

By the end of her first year Anne had persuaded the Canberra Eisteddfod to include one-act plays in the 1955 competition, and had staged Christopher Fry’s A Sleep of Prisoners, until then presented exclusively in churches, at Riverside. In 1956 Peter Sculthorpe set 24 of her songs to music for Ulterior Motifs. On her resignation in 1958 she was given life membership of the Society in appreciation of her outstanding and unselfish service.

Anne’s first marriage had ended in divorce; she married Robert Johnson in Canberra about 1959 but kept her previous married name. She also went back to biochemistry, working at CSIRO 1959-1965. Advancement required a PhD but she was discouraged by being told that, as a woman of 40, she would be incapable of such an undertaking. Later in life she would have fought back, but then she chose to take a different path and enrolled in English literature at the Australian National University. Her two sons were also at ANU, and let slip that she had produced plays. For the next six years Anne produced and wrote satirical verse for the ANU Revue, as well as tutoring in drama.

Graduating in 1966, Anne tutored at the University of NSW 1968-1974 while studying for a Master of Arts in drama at Flinders University (1973), and then accepted an appointment as National Consultant for the Australian Youth Performing Arts Association in 1975. She travelled Australia surveying the state of youth theatre; her reports to State and Federal Governments led to appointments to the National Steering Committee for the Study of Education and the Arts and to the Theatre Board.

The isolation of her travels reawakened her interest in writing poetry, set aside since ANU days when she had received guidance from poet A D Hope. For her new role she chose a new name – Anne Edgeworth – in recognition of both her mother’s and her grandfather’s love of poetry, particularly of reading it aloud. During the 1980s she wrote many poems about Canberra. In 1997 with Hec McMillan and Ken Gardiner she read a selection that was recorded on CD by ArtSound FM, for whom she had presented programs since 1990.

Writing and numerous other literary activities notwithstanding, Anne was also active in several environmental groups and social justice organisations. On her survey trips in 1975 she became very involved with a group of indigenous and non-indigenous people exploring what was really happening in the communities. She was carrying recording equipment, and later transcribed the interviews and sent them to the Committee for the Elimination of Racial Discrimination (CERD) in Geneva.

From 1980 to 1986 Anne set up and coordinated a community education program of craft and cultural courses at Canberra TAFE. In 1989 she was writer-in-residence at the University of New England at Armidale. Well known for her practical support for other writers, in 1995 she helped establish the ACT Writers Centre.

Anne died at Jindalee Nursing Home, Narrabundah on 15 June 2011. Her poetry, which ranges from satirical to serious, lives on in newspapers, magazines and many anthologies as well as personal compilations. It is poetry of place, of human relationships, of politics and social justice; it celebrates Anne’s life and times.

1988 ‘Arts and the theatre: Anne Godfrey-Smith’, in Rudduck, Loma, A celebration of women in the growth of Canberra, Canberra, Australian Federation of Business and Professional Women Inc. A.C.T. Division