The Kokoda Campaign - The Recce Patrol to Kokoda

On 13 June 1942 Ted Young and another lieutenant from the 3rd Battalion entered the jungle near Owers Corner in Papua. They were on a reconnaissance patrol to identify the best positions to defend against an overland attack by the Japanese from the north coast of Papua and to assess the possibility of building a road across the Owen Stanley Range. Six months into the war in the Pacific, they became the first commissioned officers of the Australian Army to walk the Kokoda track. It took Young and his patrol three weeks and a bout of malaria to complete their work and report to headquarters in Port Moresby. They described the topography as “a seemingly endless entanglement of mountain ranges with NO definite line of direction”, varying from 1,000 feet above the river valleys and up to 7,500 feet. Walking the track was “extremely difficult” as it was “mostly wet, very slippery, covered with roots and vines, averaging about two feet in width (at times six inches wide) with a thick undergrowth cut back approx. three feet on either side”. Visibility was “BAD – at times only ten yards moving in a very dull light owing to the overhead foliage.” They also identified three key defensive positions along the track at Deniki, Isurava and Eora and warned of the severe challenges to be faced by both defenders and attackers. Isurava and Eora would become sites of major battles.

Few people realise that the men of the 3rd Battalion were intended to be the first Australian soldiers to be sent to Kokoda, but an outbreak of measles saw them replaced by the 39th Battalion instead. However, the 3rd Battalion was sent onto the Kokoda track on 5 September and spent the next 100 days in the front line fighting the Japanese back to the north coast of Papua at Gona. The 3rd Battalion, also known as the Werriwa Regiment, came from south east New South Wales and had its headquarters at the Drill Hall in Kingsley Street, Acton.

Ted Young fought with the 3rd Battalion throughout its Kokoda campaign and earned the Military Cross for his actions between October and November 1942 at Templeton's Crossing, Oivi and Gona where he was severely wounded. One leg was amputated at a field hospital and the other leg after his return to Australia. When he finally made it back to Canberra his neighbours bought him a wheelchair, the Red Cross presented him with a car especially fitted with hand controls and a ramp was built at East Block so that he could return to work. 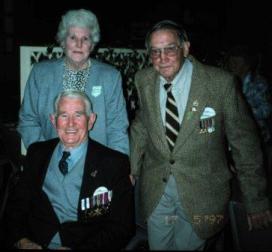