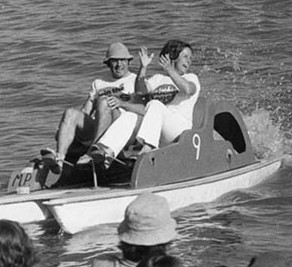 Jack was a grocer who was then serving in the Australian Navy, having previously enlisted in the Army (1940-1941), and who went back to sea after the war as a merchant seaman and a prominent member of the Australian Seamen's Union before returning to Armidale. Injuries sustained during the war forced him to retire early, first to Coffs Harbour and then to Canberra where he became an amateur radio operator.

John attended Armidale Demonstration School, Armidale High School and the University of New England, graduating in 1965 with an honours degree in history. He captained both his schools and shared the Shell prize for arts at university, and was a talented sportsman.  In 1965 he joined the Department of External Affairs as a cadet diplomat, then spent two years in New Delhi as third secretary at the Australian High Commission.

He won a Fulbright Scholarship to the East-West Center at the University of Hawaii in 1968, graduating in 1969 with an MA in modern Asian history. On his return to the Department of External Affairs he was posted to Suva.

John had married Jennifer Major, his high school sweetheart and by then a teacher, on 9 May 1964 but they separated in 1968 and divorced in 1971. In Hawaii he had met American student Karla Havholm; they married in Suva on 8 November 1971, and had two sons.

Although he had joined the Liberal Party in 1969, John's interest in standing for public office was not aroused until 1973 when he was appointed senior private secretary to Billy Snedden, then leader of the Opposition. After six months as a visiting fellow at the Australian National University, in 1975 he was posted to Saudi Arabia as counsellor to the Australian Embassy. Federal elections were called after Gough Whitlam's dismissal in November 1975; John campaigned successfully for one of the ACT's two new Senate seats and was literally the first Senator for the ACT, winning a higher percentage than his Labor counterpart, Senator Susan Ryan.

John understood parliamentary institutions and was trusted by all sides of politics. From 1976 he was chairman of the Joint Parliamentary Committee on the ACT as well as serving on several committees during his parliamentary career, including foreign affairs, defence, health and welfare, and the arts. He was re-elected in 1977 and was appointed deputy-Whip in 1978, then Whip after re-election in 1980.

During John's chairmanship of the Joint Committee three major inquiries were referred to the committee, on planning, energy and tourism. He introduced, among other innovations, automatic consultation with the Legislative Assembly on proposed variations to the Canberra City Plan, and maintained very cooperative relations with the Department of the Capital Territory and his local parliamentary colleagues. He was especially concerned with the effect of federal initiatives on Canberra, such as the lack of essential services for young families living in the new suburbs and the need for better coordination of development. He also played a major role in ensuring the preservation of much of the shores of Lake Ginninderra for public recreation. On Canberra Day 1982 almost 12 hectares on the eastern shore was gazetted as John Knight Memorial Park.

In his last months, John was  involved in activities relating to the International Year of the Disabled (1981) and was writing a book. Other community involvement was with the Blind Society of the ACT and the ACT Branch Regular Defence Forces Welfare Association, as a member of Western District Rugby Union Club and as patron of the Canberra Barefoot Water Ski Club and the Australian National Eisteddfod Society.

John died on 4 March 1981 in Royal Canberra Hospital following a heart attack while water skiing at Lake Jindabyne on 28 February. He was cremated at Norwood Park, and his ashes were scattered over Mount Duval, just outside Armidale, and at Norwood Park.

There were many tributes for a man who had already done so much but had so much more to give. Young, physically and mentally active, an extraordinarily hard worker with the ability to see all sides of a question and to bring together people of all political stripes and colours, he was exactly the kind of politician required after the disruptions of the 1975 double dissolution. He was to have opened an exhibition of musical sculptures entitled 'Our Broken Toys'; instead, the opening became a celebration of John's love of anything “diverse, interesting and so much fun”.

Other tributes included a poem by Michael Thwaites, a hostel for disabled young people, and a trust fund established to bring community leaders from the South Pacific to study at the Australian National University. On the day of his funeral, 6 March, he was named Canberran of the Year, with the accolade: “Canberra's citizens have been well served by its first senator. He was well known, loved and respected in all circles of our community. He shared all our aspirations for the development of the ACT as a place where people lived, not just the national capital”.

The family tragedy was compounded by the sudden but unrelated death of his father in Casino hospital the day after John was admitted to hospital in Canberra. His body was brought home to Canberra where, on the day of his son's death, he was cremated at Norwood Park.