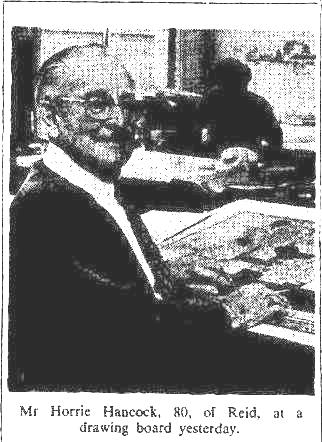 Horrie Hancock was born at Leichhardt, Sydney, in 1895, the seventh of nine children of Henry and Mary nee Pilford or Pilfold – the name is reported in both forms throughout Horrie’s life.

He studied architecture at Sydney Technical College, and was an architect in private practice in Sydney. In 1935 he established National Builders Ltd, of which he was director and secretary. By 1939 the company was in financial trouble and Horrie filed for bankruptcy before moving to Canberra to join the Department of Works and Housing.

In 1948 Horrie was reported to the security services as being a communist sympathiser. He was investigated, found to be a respected member of the architecture profession, and by 1952 was no longer under suspicion.

He retired from the Department in 1955, aged 60, and set up again in private practice from his home in Reid. In 1966 he partnered with two other architects to establish Hancock, Courtney and Renfree, based in Dickson. He retired from this firm in 1975, aged 80.

In 1967 Horrie designed and supervised the construction of Koomarri hostel and sheltered workshop in O’Connor.

Horrie married Ruby Aileen Pemberton (1897-1987) on 18 October 1917 in Sydney; they had two children. Ruby shared her husband’s interest in helping people with disabilities, and was for 20 years on the executive committee for Koomarri. They also shared an interest in bowls, and were members of Canberra City Bowling Club from 1947.

Much of the Hancocks’ time was spent working for the disabled in Canberra. Horrie was a founding member and first president of the ACT Subnormal and Incapacitated Children’s Welfare Association, later the Handicapped Citizens Association of the ACT, which ran Koomarri. Just before Horrie’s death in 1987, the name was changed to The Koomarri Association.

He served as president from 1954 to 1972, and it was for this community service that he was awarded Citizen of the Year for the ACT in 1967 and an MBE in 1969. In his time as president, the first preschool for handicapped children in Australia was begun at O'Connor, later moving to Turner.

From 1969 to 1975 he was a board member and treasurer of the Australian Association of the Mentally Retarded. He was also a life member of both this and the Handicapped Citizens Association. A painting of Horrie was commissioned, and was hung at Koomarri in 1979 when extensions to the junior school were opened.

Although retired from committee work for disabled children, Horrie and Ruby continued to support them. Ruby started Miroma, an organisation to aid disabled children, and the Hancocks ran a stall at the Fyshwick markets to raise funds for it.

Horrie and Ruby died within six months of each other, Ruby in May and Horrie in November 1987, at their home in Newcastle. Both were cremated at Beresfield following funeral services at St Augustine’s Anglican Church, Merewether.