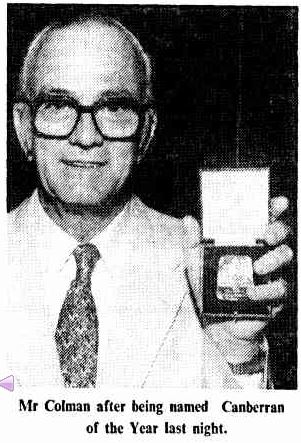 George Colman was born in Blayney, NSW, on 10 March 1914, the son of Herbert George Colman (1879-1959) and Elsie Marion nee Austin (1881-1959). Herbert was then the local manager for James Buchanan Young, who preferred travelling for Dalton Bros, wholesale grocers in Sydney, to managing his own store.

That year, Young bought out Harry Solomon’s Universal Providers, whose premises in the main street of Queanbeyan were on the site of John Joseph Wright’s original store, and Herbert was despatched by Cobb and Co coach from Blayney to open the new J. B. Young store on the first of June. The new shop prospered and in December 1919 Young retired to Manly leaving Herbert as managing director of J. B. Young Limited. Ten years later, Herbert acquired Young’s interest and the business became a family firm.

Meanwhile, on 12 December 1924, Herbert Colman acquired Canberra’s first retail lease, at Kingston (and a gold pen from the government in recognition of the historic event), and exactly a year later opened the first Young’s in Canberra. His motto was ‘enterprise before population’, an injunction that George took to heart.

Young George grew up on the family property ‘Kawaree’, then on the edge of Queanbeyan, and at 12 became fascinated by the new wireless technology. He helped build the earliest wireless sets in the district, selling the first to Walsh’s Hotel and the second to his father.

He and his brother Jim attended Telopea Park, then the nearest high school, travelling by sulky, but he became bored with the twice-daily catching, harnessing and feeding the horse and insisted on leaving school at intermediate, when he was 14. Parental permission was granted on condition that he study accountancy and work in the family firm.

George started at the new Kingston store in February 1929, officially as a sales assistant but in reality undertaking menial tasks such as shovelling lime. This was used extensively at the time, not only on fireplaces and in gardens but also to lime-wash fowl houses to deter ticks. He worked his way up, receiving a thorough grounding in all aspects of the business before he was appointed store manager at Kingston in 1939.

When war broke out George enlisted in the 3rd Infantry Battalion, a militia unit headquartered in Queanbeyan; within months he rose from NCO to Lieutenant, and in May 1942 left with the Battalion for New Guinea, where he enlisted in the AIF. He saw service at Milne Bay, Lae, Bougainville and nearby islands, and was discharged with the rank of Captain.

On 1 November 1941 Lieutenant George Colman married Ethel Grace Smith at Wesley Chapel, Sydney. Grace was the youngest daughter of Robert Smallwood Smith, shopkeeper (1878-1963) and Ethel Minnie nee Barnsley (1882-1945), and during George’s absence she and their infant daughter lived with her parents in Bowral. In November 1945 Grace’s mother and daughter died in a house fire and George was granted early discharge. He and Grace subsequently moved to Canberra, and had four more children.

After the war the Colmans began a period of expansion, starting with the enlargement and renovation of the Queanbeyan store in 1954. In 1959 Herbert Colman died and the family firm was incorporated as J.B. Young Holdings Limited; George was appointed managing director in 1961 and with his brother Jim introduced changes that kept Youngs at the forefront of the retail industry, which was seeing the growth of multi-store chain groups, the movement of department stores into the suburbs, and retailers with buying power beginning to by-pass the wholesaler and also offering discounts in the burgeoning household appliance field.

George’s first move in 1961 was to renovate the Kingston store, where he installed Canberra’s first escalator to the new upper floor. With the development of the Woden Valley he opened new stores at Manuka and Deakin, and also consolidated the various Civic premises into a new store at Garema Place. This store successfully competed with the Monaro Mall that opened in 1963, and not only introduced the Stroll-a-Way or step-less escalator but also a creative advertising idea by commissioning a mural for the store windows that incorporated the store’s products.

Expansion by building and takeover continued through the 1960s as far afield as Orange, the NSW South Coast and Victoria, the company was listed on both the Sydney and Melbourne Stock Exchanges, and new names appeared in Canberra: Community and Family Stores, Owl and L’il Owl discount food markets. Youngs acquired the 43-store Fosseys chain in NSW and the 18-store E. C. Hattam Holdings in Victoria. The new technologies were embraced, and by 1970 the entire food operation was managed by computer. At the 1964 Canberra Jubilee dinner, George reaffirmed his belief not only in customer service but in creating services ahead of need.

In the midst of this business activity, George found time for community service. In 1964 the firm celebrated its Golden Jubilee with year-long activities that included establishing a Community Chest, which donated a set percentage of each week’s turnover to one of 50 community service organisations in Canberra and Queanbeyan. As a result, the firm won the National Retail Merchants’ Association of the United States/Readers Digest International Community Service Award for that year.

George was appointed as a member of the Council of the Australian National University in September 1969, and reappointed for a further term 1972-1975, serving on nine committees including the Finance Committee. He was the inaugural chairman of the Salvation Army’s regional advisory board as well as serving in other business and commercial capacities, and also worked with Legacy, Scouts, Rotary and the Confederation of ACT Industry. He was a foundation member of the Canberra Council of the Australian Institute of Management, and inaugural chairman of the Capital Arts Patrons Organisation (CAPO).

On his 65th birthday in 1979 George endured his naming as Canberran of the Year (he was highly embarrassed by being “driven around Civic like royalty”), having a month earlier celebrated 50 years with Youngs prior to retiring on 30 June. In retirement he indulged his boyhood interest in radio as a member of the local branch of the Historic Radio Association.

1964 G A Colman. ‘The history of retailing: Canberra and Queanbeyan area’. An address delivered before the Canberra and District Historical Society