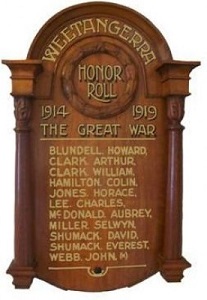 The Shumack family were one of the most prominent in the Canberra district during the second half of the nineteenth century when several of them selected land in Weetangera and Upper Canberra. One of them was Richard Shumack who chose land on the south side of Weetangera Road covering half of the modern-day suburb of O’Connor. He called his property ‘Tolldale’, the site of which is the O’Connor Tennis Club in Banksia Street. It was the family home of his daughter Helena who married Archibald Hamilton in 1899. Unfortunately Helena died in 1910 and, for a time, her husband left their four children with her cousin Samuel Shumack at ‘Springvale’, Weetangera.

The Hamiltons eldest son, Colin Hamilton, was born on 13 July 1900 in Canberra, probably at ‘Tolldale’, and went to school at Weetangera while he and his siblings lived at ‘Springvale’.  His father had once been a soldier and asked that his sons be taught sewing at school which Colin later admitted he found useful on the Western Front. At some stage father and children were reunited in Sydney as Hamilton was living there when he enlisted on 30 April 1917.

To join the AIF without parental permission a man had to be 21 years of age but he could enlist if he was aged 18-20 years with the signed consent of his mother, father or guardian. Colin lied about his age attesting that he was 18 years and 1 month when he was actually only 16 years and 9 months old. He probably forged his father’s signature as well when he joined up. Hamilton was around 5 feet 4 inches tall (about 164 centimetres), weighed less than ten stone (about 55 kilograms) and gave his occupation as ‘newsboy’ when he enlisted. The signs would have been obvious to any recruiter that Colin was underage.

Yet he was accepted into the AIF and embarked from Sydney on 10 May 1917 with the 4th reinforcements for the 30th Battalion. He had a hard time on the ship over to England being ‘crimed’ five times, mostly for missing parades. He was charged a sixth time in camp in England for missing a parade before being sent to France in February 1918 as a reinforcement for the 33rd Battalion, part of the 9th Brigade of the 3rd Division of the AIF.

When the Germans launched their last major offensive of the war in March 1918 they captured ground the Allies had fought so hard to gain during the Battle of the Somme in 1916. The 9th Brigade was rushed to Villers-Bretonneux, a village strategically important to the defence of Amiens, the transport hub of northern France. On 4 April the Germans attacked the village but were repulsed by the 9th Brigade. However, on 17 April, while the troops were resting in a forest west of Villers-Bretonneux, the Germans bombarded the town and surrounds with about 12,000 rounds of mustard, sneezing and phosgene gas shells, sometimes at the rate of one every two seconds. The gas drenched the area and impregnated the clothes of soldiers, affecting men’s eyes and the sensitive areas of their bodies. Some 650 men became casualties, including Colin Hamilton.

It was normal procedure that the next of kin was advised when a soldier was wounded so, shortly after his father was told of Colin’s whereabouts, AIF Headquarters in London were ordered to send Hamilton home “for discharge under age”.  By the time he was discharged in Sydney on 13 October 1918 Hamilton had turned eighteen, but his war had ended anyway. After some debate the authorities decided that Colin was eligible for the service medals he had clearly earned. He married Rose Whitlock in April 1925 and they lived in Sydney where he worked as a tram conductor. During the 1930s Colin served in the militia by which time he had grown three inches in height and added about 30 pounds in weight. He enlisted in World War 2 with the RAAF serving as a guard on postings in Canberra, Townsville and (briefly) Port Moresby. When he died in Sydney on 4 March 1993, Colin Hamilton became the last of the First World War soldiers on the ACT Memorial to pass away.